The 24 Hours of Le Mans is a uniquely fascinating race.

Everyone says it, we read about it everywhere, but to actually experience it for yourself was something different.

It’s not something that hits you straight away, but something that slowly gets under your skin during the week of preparation for one of the most incredible races in the world.

It’s like a scent of epic motorsport era: it still has the flavour of a feat.

To face that “monster” alongside the Duqueine team, Skydrive worked for four months on the tyres, carrying out tests and measurements with the VESevo

The project carried out with the French team on its LMP2 Oreca Gibson was ambitious.

In two test sessions and two race weekends of the European Le Mans Series we had to collect as much information as possible about Goodyear tyres, ‘build’ a Pacejca model using Megaride’s T.R.I.C.K. tool and arrive at the most important race of the year with a reliable predictive system of tyre performance and wear.

The tests were carried out on very different track, under different asphalt and temperature conditions: from the super abrasive asphalt of Barcelona, with cold early spring temperatures, to the high load of Spa-Francorchamps, and to very high temperatures of Paul Ricard and Imola. Those were intense working days and the amount of data collected is truly remarkable.

TRICK tool has been employed to evaluate tyre-road interaction characteristics and perform preliminary analysis on tyre and vehicle performance. Once the tyre model had been worked out, all this was possible, but it was necessary to refine the model as much as possible through massive data collection on track, especially with a dedicated optical measuring device, the Kistler’s Correvit S-motion.

TRICK “virtual telemetry” has been analysed and processed within a specific MegaRide tool called RIDElab, which allows to calibrate and validate all the multi-physical phenomena (thermodynamics, abrasion and degradation, advanced dynamics, etc) which take place at tire-road interface; TRICK tool outputs have been used as experimental data for the identification of the Magic Formula microparameters

Microparameters that were constantly improved, which allowed the TRICK predictions to be constantly refined to the point where they overlapped with real measurements made with real optical support.

The result was a kind of “virtual telemetry” capable of assessing the slip angle of each tyre, in every millimetre of the track, depending on few specific telemetry index of the car. In essence, it was as if we had a virtual Datron mounted on the car.

At this point we were ready to tackle Le Mans: our tyre model was reliable in every respect. 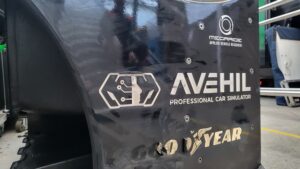 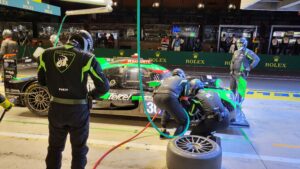 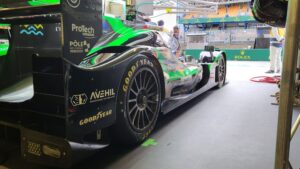 The 24 hours of Le Mans is not just a race weekend: it starts the Sunday before, with the Prologue, a preliminary test session, and then it continues uninterrupted until the start of the race, on Saturday at 4pm. It is a week in which we race in almost all conditions, from the hottest to the coolest, with the track that gradually changes from green to rubbed

During this week we carried out preliminary analyses on no less than 33 sets of tyres, so that we could then select them up according to the characteristics found on each set.

Having obtained the hysteresis and adhesion data for each tyre, using the Vesevo, we were able to allocate the tyres with the best adhesion for the night part of the race, while those with the highest hysteresis were assigned to the hottest part of the 24-hour race.

Each set was then prepared with the correct pressure, according to the expected temperatures and state of the track.

Unfortunately, it was not a lucky 24 hours.

Reliability problems plagued Duqueine’s engine right from free practice when they had to replaced it. Those problems reappeared after five hours of racing, forcing the car to make an unscheduled pit stop to fix a sensor, so ending up far behind the leading group.

However, once fixed everything was finally back in place: the car was running like a clockwork.

And the tyres were working exactly as expected, performing perfectly, from that point on we were able to run exactly as planned.

Unfortunately, the result was already compromised.

This doesn’t change the goodness of the work done on the tyres. On the contrary, it leaves open a big window of possibility for the future: we will be back!

We will be back because we are aware that the work done can bear great fruits, but also and above all because the fascination of this race has bewitched us.

The challenge is hard, difficult, perhaps the hardest and toughest experienced so far, almost impossible: that’s why we like it! 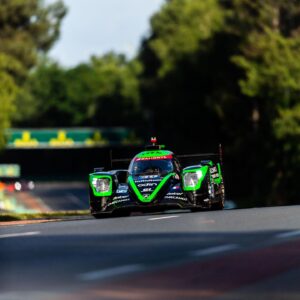 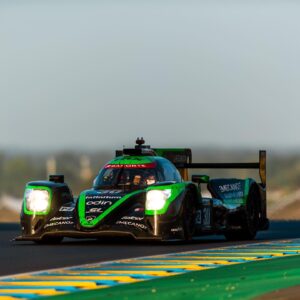